I just returned from a month in the USA, where I attended and spoke at the CQ (Cultural Intelligence) Summit. The summit theme was inspired by David Livermore’s new book – Driven by Difference – How we can we fuel innovation through diversity.

There was also an interesting focus on domestic diversity at the summit.  Often when we hear diversity, we immediately think of ethnic diversity, but diverse teams could also  include diversity through gender, age, profession, disability and a variety of other categories, that are crucial to relationship building. As part of my extended trip I spent some time in an Amish community learning more about their lifestyle; with bikies in their leather jackets, covered in tattoos, talking about life on the road; reconnected with ‘old’ friends from the heart of Texas (who I met in 1999), who in turn introduced me to a well known folk singer – Bill Ward, made amazing new friends and business contacts and crossed the country from New York to the Northern midwest in Michigan, down to the Gulf of Mexico in the south. It was a wonderful cultural mixed bag of experiences.

One of the newest tools released will measure cultural dimensions, a topic I often speak on.  For those not that familiar with the background of CQ, you may be interested to know that 55 000 people in 98 countries were surveyed originally, leading to the four capabilities we assess today.  These in turn predict: Cross Cultural Adaptability, Judgement and decision making, negotiation Skills, Strategic Leadership and how you would expand into new cultural markets.

I would love to hear how you think people differ in your organisation.

I’m very excited about my new partnership with the Cultural Intelligence Center (CIC). Our new Mastermind groups will be launching this month. 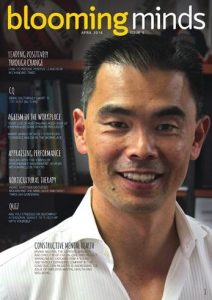 I also had the opportunity to write an article for the amazing Tasha Broomhall’s magazine, Blooming Minds based in Perth, Australia. This magazine is focused on mental health in the workplace and filled with great articles, often with a cultural focus – as culture is so important to maintain healthy relationships. I suggest you subscribe if you don’t already receive this gem in your inbox.

Looking forward to sharing what is current in making a difference through cultural understanding.